The team started training in mid January and is now working on the last little pieces to start strong into the new season.

The biggest news is that the Vikings are finally have a women team - more details will follow shortly.

The first big tournament of the year is coming up this weekend.

We have got our team together and looking forward to compete against teams from all over New Zealand.

BRING IT ON and bring your supporters to support the Vikings!

Our partner Scots College has started their school team training on Thursdays 5pm to 6:30pm.

Due this change the training time on thursday will move 30min later (6:30pm til 8:30pm).
When someone want to help Lars with the team he is happily invited to come and participate with the juniors and the youth.

the season preperation for the Vikings has started already.

To all Vikings members - PLEASE come, if you can't make it please text (or email) the Coach

To all new players/ interested players - feel free to come along and see what it is like to be with the Vikings and maybe later to be a VIKING :-)

The Vikings lost in a dramatic final against the Spartanz Gold team with 1:2 in the Wellington Beach Handball Championships.
The first period was won in a close match by the Spartanz. The Second period was then dominated by the Vikings and ufortunately for the Vikings the shootout was a Hitchcock like highlight with the luck on the Spatanz side.

In the First round the Vikings beat the Spartanz Black team and the "Knights of Lawrence Team" each with 2:0.

The semifinal was then a close match versus the French Toast Mafia (Waikato Handball Club) but the Vikings stayed ahead and won 2:0.

This weekend the Vikings were invited to the Massey Handball Tournament at Palmerston North and achieved an outstanding 2nd place.

After beating the BHC Wolfpack/Pistol Shrimps twice and the Spartanz once we were qualified for the Final against the Auckland team.
Unfortunately we weren't able to beat the strong Auckland team who well deserved the win after outstanding performances throughout the tournament.

Congrats to all Vikings who played and showed great team spirit and awesome Handball!

Next Saturday (13/11/2010) the Vikings will participate at the MAssey Tournament at Palmerston North.
If you ahve any questions or need some more information please don't hesitate to email: [email protected]

Test game vs the Hutt Hawks

At Sunday night the reigning Wellington League Champion was challenged by the Hutt Hawks in a test game.
The main goals of the Vikings were to improve the team play and to try things which we had practised in training sessions over the last few months.

The first half started of terrible as the Vikings player seemed to be somewhere else with their minds. The young Hutt Hawks team played really well in this phase and used the weakness of the Vikings towards a 9:17 half time lead.
During tghe Halftime break the coach found clear words that he hoped will wake up his team and it did. The second half showed then the true Vikinsg sprrit as the lead got cut back goal by goal (12:17, 15:17) until the equalizer. The Vikings now on top of their game, controlled now the action and took the lead to carry towards a 26:22 victory.

Vikings summary:
From a coaching point of view I was disappointed as we couldn't force ourselfs to try out new things and to improve the game with each other in the way I hoped for. Surely the comeback in the second half was remarkeable (17:5) but as a team we need to understand that test games are there to develop individuals and to develop the team game which I didnt see today.
From a team spirit point of view I am really pleased we had so much participation today and were able to get our sh** together to turn around the game. Well Done boys.
On a side not there was a really good first game of John who just started with playing Handball and recently joined the Vikings and two guest players from Germany who showed some good Handball skills which were hopefully a good example for some players who played today not on the same level as they normally played.

After a great comeback in the secon half from 6 behind, the Vikinsg won 30:29 against the Spartanz.

An incredible team effort and huge support on the ranks helped the Vikings to recover from a bad first half in which the Spartanz seemed to dominate the Vikings (14:20).
In the halftime break the Vikings put their heads together and evoked the team spirit they are known for and helped them to make the finals.
Goal by Goal, minute by minute the Vikings came closer and the crowd went nuts to support the Vikings rated as underdog before the game.
In the final minutes of the game the team sealed the Championship with cleverness and teamspirit! 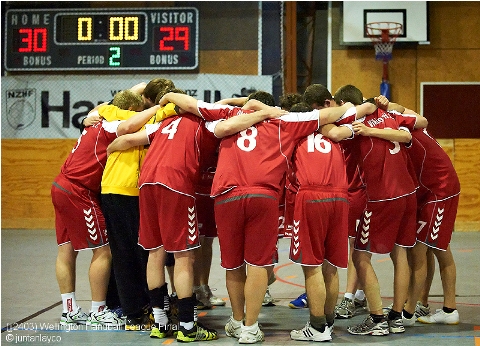 Vikings in the Wellington League final

After a hard fight the Vikings defeated the Pistol Shrimps with 24:22 and are now facing the Spartanz [Gold] team in the final on the 24th October 2011 at Kilrbirne Recreation Centre (7:30pm).

COME AND SUPPORT THE VIKINGS

All game reports are available on www.wellington.handball.net.nz

Start a Free Blog at Webs.com